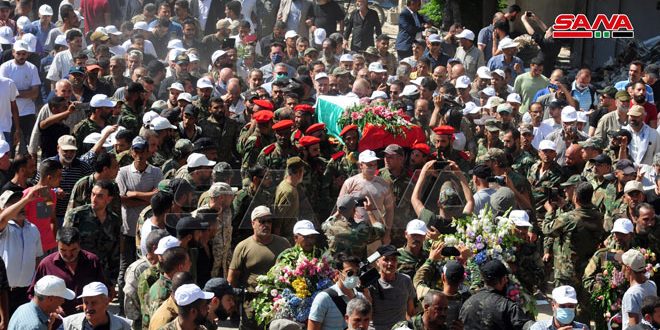 Damascus, SANA- The body of late Secretary-General of Popular Front for the Liberation of Palestine — General Command, Ahmed Jibril, was buried on Friday at his final resting place in the Martyrs Cemetery in Al-Yarmouk Camp.

The funeral of Jibril, who passed away on Wednesday afternoon, set off from Omaya Hospital to al -Othman Medical Complex in al-Mesat for performing the funeral prayer to be buried later in the Martyrs Cemetery in Al Yarmouk Camp.

In a press statement, Assistant Secretary-General of the Front, Talal Naji, mentioned the achievements of the late, saying “Jibril left a method in struggle and resistance throughout the Palestinian arena in general, pledging him that the front will continue this journey until achieving victory.