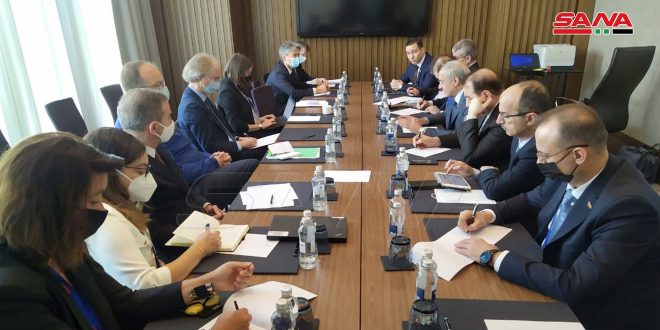 During the meeting, the two sides reviewed the latest developments in Syria, as Dr. Susan stressed the necessity to raise the voice loudly regarding the violations committed by the two Turkish and US occupation forces against the Syrian people whether with regard to supporting the terrorists and the affiliated groups or stealing the natural resources and potentials of the Syrian people because those violations in addition to the unilateral conceive measures are the main reason for the suffering of the Syrian people and the difficult conditions they are living.

They also touched upon the political process, as Susan confirmed the Syrian government continued positive dealing with this process, in turn, Pederson expressed his intention on continuing efforts to prepare for holding the six round of the meetings of the Committee of Discussing the Constitution in Geneva.

Earlier, the Syrian Arab Republic delegation, headed by Dr. Ayman Susan, Assistant Minister of Foreign Affairs and Expatriates held a meeting with Russian delegation, headed by Russian President’s Special Envoy to Syria, Alexander Lavrentiev in which they reviewed the items scheduled on the agenda of the current meeting, the developments in Syria and the Western incorrect policies with the aim of continuing the war on it.