Wide international condemnation of US aggression on Syrian, Iraqi sites 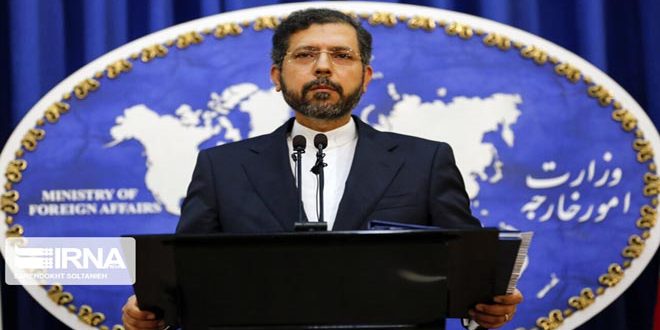 Tehran, SANA- The Iranian Foreign Ministry has stressed that the US aggression against sites in Syria and Iraq at dawn today is a part of the American arrogance and its aim is to inflame tension in the region, calling on the new US administration to change its behavior, correct its mistakes, and stop its interventions in the region.

Iranian Foreign Ministry Spokesman Saeed Khatibzadeh said in his weekly press conference today that he advises the new US administration to stop this aggressive behavior in the region and not to interfere in the internal affairs of its peoples.

Khatibzadeh stressed that the United States is still on the wrong path and continues with its arrogance, “and therefore, we ask it to stop its incorrect behavior and change its behavior instead of creating a crisis and problems for the peoples of the region, because destabilizing the security of the region will not be in its interest.”

He pointed out that the Middle East region has faced many problems since the establishment of the Zionist occupation entity.

US aggression a violation of countries’ unity and independence, Shvetkin says

Meanwhile,  Deputy Chairman of Russian State Duma Committee of Defense Affairs Yuri Shvetkin has affirmed that the US air strikes on sites in Syria and Iraq at dawn today are “an act of aggression.”

Shvetkin told reporters today in Moscow, “I consider that the blatant aggression by the United States is a violation of the principles of the unity and independence of the two countries, Syria and Iraq,” adding, “It only expresses an outrageous interference in their internal affairs.”

Shvetkin stressed that the aggression is a brutal act that lacks any legitimacy.

Tehran: US aggression on sites in Syria and Iraq aims to inflame tension in the region 2021-06-28
ruaa-jazaeri
Share
Previous Iraqi Armed Forces: US aggression on a site on Iraqi-Syrian borders flagrant violation of sovereignty
Next Syrian Airlines to run four flights to Dubai weekly