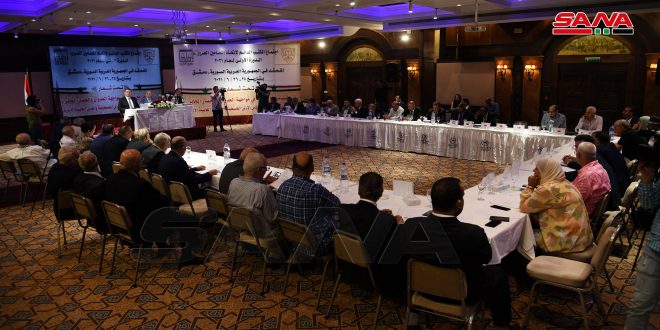 Damascus, SANA- Participants in the 1st  session of the meeting of the permanent office of the Arab Lawyers’ Union held recently in Damascus called for lifting the unfair siege imposed on the Syrian people, asserting Syria’s right on adopting all means to eliminate terrorism and liberate all its occupied lands. The meetings of the Permanent Office of the Union of Arab Lawyers closed this Saturday in the capital Damascus with the approval of a final declaration that expresses solidarity with Syria and the rejection of terrorism and occupation that this nation faces.

In the final statement, the participants condemned the occupation of any part of Syrian territory by colonial powers and their support for terrorist groups, as well as called on the international community put pressure on the occupied countries and force them to withdraw from Syria. The statement condemned the Turkish regime’s continued crime of cutting water for a year on one million and a half Syrians in Hasaka, and described this action as a crime against humanity and a violation of the international law.

“Syria has the right to use all means to eliminate terrorism and restore its occupied territories, in particular the occupied Syrian Golan,” the statement stressed.

Syria’s victory over the aggression came as a result of the unity of Syrian people, army and leadership, and is a bright chapter in the Arab struggle against colonialism and its supporters, the final statement said.

It added that “the correct path in front of the Arab Nation is based on joint action, the development of Arab-Arab relations and the work for an economic, political and militarily Arab integration.