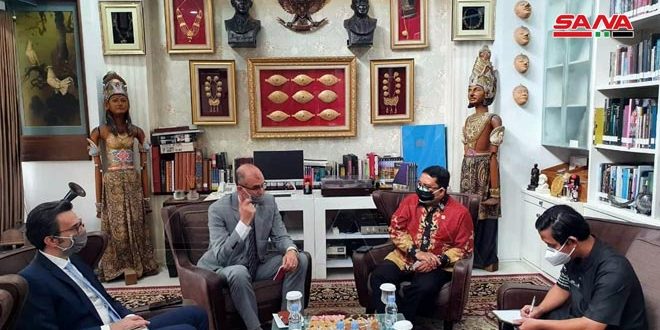 Jakarta, SANA- The Acting Chargé d’Affairs of the Syrian Embassy in Jakarta, Abdul Moneim Annan, discussed with Fadli Zon, Chairman of the Committee on Foreign Relations and Inter-Parliamentary Cooperation and member of the Defense, Foreign Relations and Media Committee at the Indonesian House of Representatives, means of enhancing parliamentary cooperation between the two countries.

During the meeting, Fadli Zon expressed the Indonesian people’s appreciation for the stances of Syria and its leadership, represented by President Bashar al-Assad, in the face of the aggressive policies of the Israeli entity and its crimes in the region, noting to the close parliamentary relations between the two countries, which were manifested in many different international parliamentary forums. He pointed out the importance of strengthening cooperation and coordination between parliamentarians in the two countries, including activating the Syrian-Indonesian Parliamentary Friendship Committee and exchanging experiences in parliamentary work and in the cultural, economic and development fields.

In turn, Annan briefed the Indonesian official on the situation in Syria and attempts that targeted it by terrorists and their supporters in favor of the Israeli occupation entity and its projects in the region.