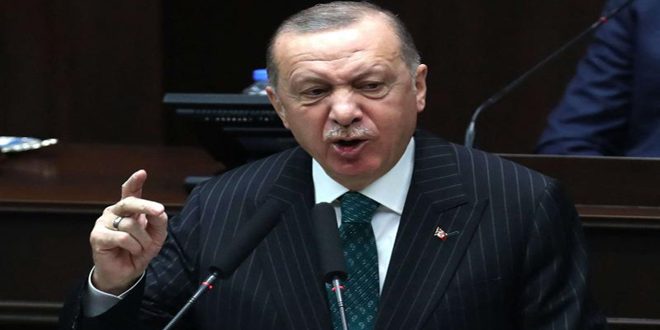 Ankara, SANA- A slip of the tongue by head of the Turkish regime, Recep Tayyip Erdogan, has exposed the reality of the Turkish subversive role in Syria and its support for terrorism while blaming the international community for not providing him with sufficient assistance for destabilizing Syria.

In a statement at Antalya Diplomacy Forum, Erdogan said, “We did not get what we expected from the international community in our efforts to destabilize Syria.”

Earlier, the Turkish mafia leader, Sadat Bakr, had published successive videos in which he exposed the role of Erdogan and those close to him in supporting and arming terrorists in Syria, on top Jabhat al-Nusra Front organization which is linked to al-Qaeda, in addition to their rampant corruption and their involvement in serious crimes, including murder and drug trafficking.

Bakr had admitted in 2015 to sending trucks loaded with technological equipment, including drones, to extremist terrorist groups in the Lattakia countryside, and then posted on his social media account pictures of the equipment and devices he had sent to the terrorists, including drones, laptops, wireless devices, video cameras, fax machines and printers, in addition to video cameras.