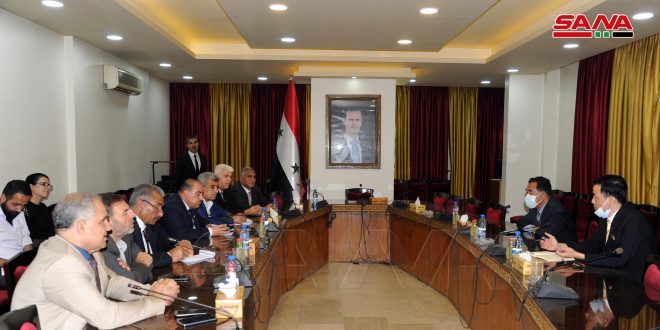 Damascus, SANA- Chairman and members of the Syrian-Democratic Korean Friendship Committee at People’s Assembly discussed on Monday with the Ambassador of the Democratic People’s Republic of Korea (DPRK) in Damascus Mun Jong-nam means of developing parliamentary relations between the two friendly countries. During the meeting, Ambassador Jong-Nam described as “distinguished and historic” the relations between the two countries, affirming his country’s absolute and unwavering support for the Syrian people in the face of terrorism in order to protect Syria’s sovereignty, security and territorial integrity.

He added that the great success represented in the achievement of the constitutional entitlement and the winning of Dr. Bashar al-Assad in the presidential election reflects the victory of the will of the Syrian people, their awareness and resistance.

For his part, Chairman of the Committee, Khaled Shabib, pointed out that the relations between Syria and the DPRK extend for many years, appreciating stances of the DPRK in supporting Syria and standing by it.

He called for intensifying parliamentary visits between two countries to enhance friendship, cooperation and exchange of experiences in all domains.