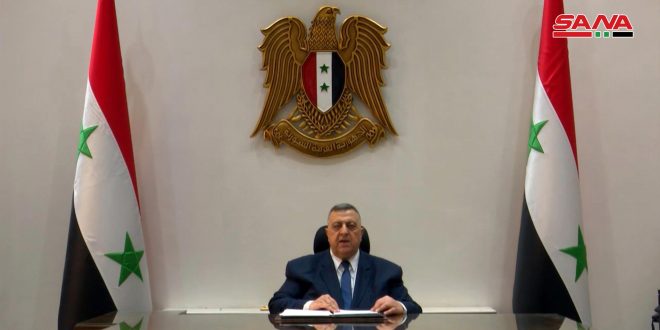 Damascus, SANA- Speaker of the People’s Assembly, Hammouda Sabbagh, affirmed keenness on enhancing the Parliamentary relations between Syria and Iran.

This came in a congratulatory cable sent by Sabbagh to Mohammad Bagher Ghalibaf for re-electing him as a Speaker of Iranian Islamic Shura Council.

” I am delighted to extend my sincere congratulations on behalf of me and the Assembly in Syria on the occasion of re-electing you as a Speaker of the Shura Council in Iran, wishing you all success” , Sabbagh said in the letter.

Sabbagh stressed the People’s Assembly’s keenness to intensify the communications and consultations with the Iranian Shura Council for the interest of the two peoples.

2021-05-29
Baraa
Share
Previous Foreign Ministry: EU renewal of unilateral coercive measures against Syria prove its full partnership in unjust war on the country
Next Shabaan: holding presidential entitlement as scheduled is challenge to the western states