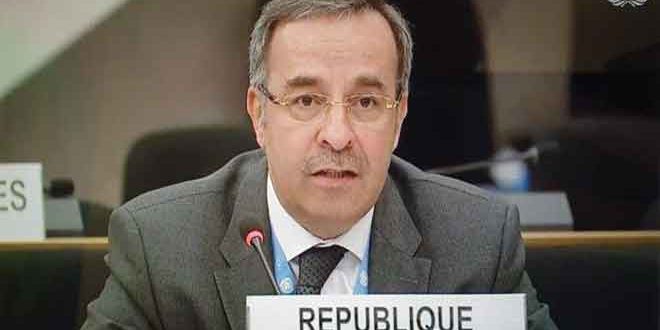 Geneva, SANA – World Health Assembly, the decision-making body of the World Health Organization (WHO), has adopted a resolution on equitable, secure and non-discriminatory way access of the people of occupied Syrian Golan and Palestinians in the occupied Palestinian territory, including east Jerusalem in accordance with the provisions of the international law.

The resolution on health conditions in in Occupied Syrian Golan and Occupied Palestinian Territories garners 83 votes in favor, 14 against.

In its 74th session held in Geneva, the Assembly called upon the WHO to continue strengthening partnerships with other UN agencies to enhance capabilities of humanitarian health respond in occupied Syrian Golan and occupied Palestinian territories, including east Jerusalem through providing comprehensive and sustainable assistance and protection during the Coronavairus pandemic and after its end.

Syria’s Permanent Representative to the UN in Geneva, Ambassador Hussam Eddin Ala said, in his speech during the meeting, that the systematic discriminatory practices imposed by the Israeli occupation authorities in an attempt to obliterate the geographic, and demographic features of the Syrian Arab Golan and impose its illegal occupation, constitute a flagrant violation of the commitment due to the international humanitarian law and violation of the international principles endorsed by the WHO constitution.

Ala condemned the Israeli occupation’s massacres perpetrated during its latest aggression on Gaza Strip, which claimed the lives of more than 250 Palestinians, among them 66 children, and causing injury of about 2000 others and destruction of  30 health facilities.

The Ambassador stressed importance of ensuring protection for the Palestinian people and mobilizing international support to the Palestinian health sector which has been primarily damaged due to the Israeli occupation’s practices and siege on Gaza Strip.

Ala called upon the WHO to implement the resolutions issued by the World Health Assembly on submitting periodical reports on the conditions in the occupied Arab territories and providing aid in the health sector to the Syrian citizens in the occupied Syrian Golan.

He concluded by warning against the Israeli occupation’s attempts to impose its mandate on the occupied Syrian Golan in a flagrant violation of the UN Security Council’s resolution no. 497 for the year 1981 which rejected the aforementioned resolution and considered it as null and void and has no legal effect

Syrian delegation, headed by Health Minister Mohammad al-Ghabbash, takes part in the activities of the 74th session of the World Health Assembly currently held in Geneva.