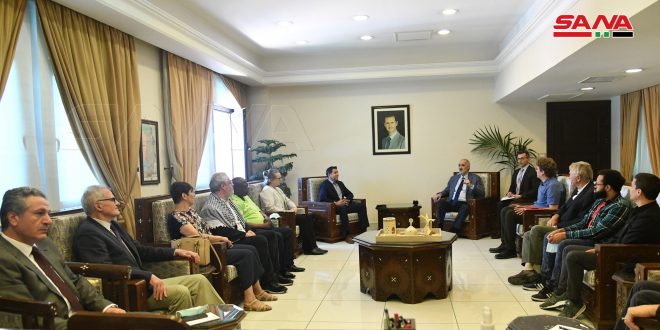 Damascus, SANA-Deputy Foreign and Expatriates Minister, Bashar al-Jaafari, received on Monday a delegation comprising a group of visitors from African , Europe and American nationalities who are on a visit to Syria to keep up and cover the process of presidential elections. During the meeting, al-Jaafari affirmed that the presidential elections entitlement is an application to the Syrian constitution and an expression of the government’s commitment to carry out the rules of the constitution.

“Despite the attempts of powers that target Syria to confuse the constitutional process, this will not affect the track of this national entitlement,” al-Jaafari added.

For their part, members of the delegation, which also includes Syrian expatriates, stressed confidence and understanding to what is going on in the country, saying that some western states have committed large faults towards Syria.