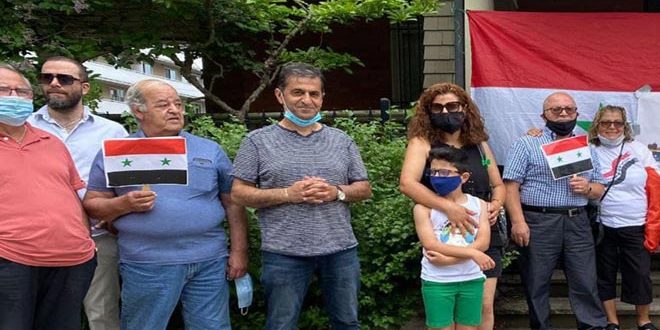 Ottawa/Montreal, SANA- Members and representatives of the Syrian community in the Canadian Capital City of Ottawa organized on Saturday two national activities in support of the presidential elections, asserting that they complement Syria’s victories in its battle against terrorism and its backers.

The participants gathered in front of the Syrian Embassy in Ottawa, raising the national flags to express happiness over Syria’s victory and steadfastness in the face of terrorism and the global conspiracy hatched against it which has been manifested through its ability to organize the presidential elections.

Members and representatives of the Syrian community in Montreal also, have also organized a similar activity through which they expressed their support to their homeland and their pride in its victories over terrorism and its backers.