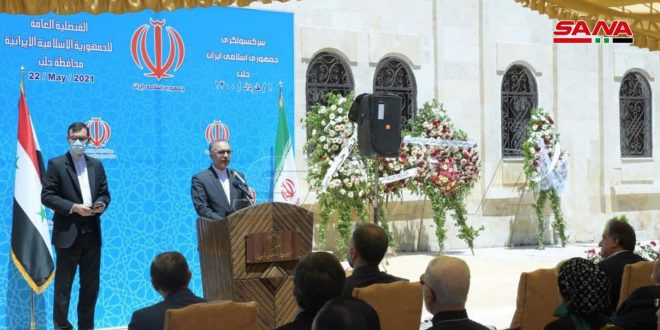 Aleppo, SANA- The consulate general of Iran was opened in Aleppo province on Saturday in framework of strengthening relations between Syria and Iran in various domains

Delivering a speech via internet, Foreign and Expatriates Minister, Fayssal Mikdad, said that opening the consulate reflects deep relations between the two countries and highlights the economic development which Aleppo has witnessed since its liberation until today in terms of reconstruction and repairing what has been destroyed by terrorism.

For his part, Iranian Foreign Minister Mohammad Javad Zarif said in a similiar speech that this step reflects the desire for an active presence in Syria during the reconstruction stage.

“ The opening of the consulate in Aleppo indicates the attention we pay to this city in terms of history and culture , and cooperation between the two countries,” Zarif said.

In turn, Iranian Ambassador to Damascus Mehdi Subhani said that opening the consulate marks a milestone in the relations between Iran and Syria, and also another evidence of the growing relations between the two countries and the effective contribution to their development, especially in economic and investment aspects.

Aleppo Governor Hussein Diab indicated that the opening of the consulate comes within the natural context of fraternal relations, friendship and cooperation between the two friendly peoples.