Pushkov: Presidential elections in Syria are necessary and significant during the current stage 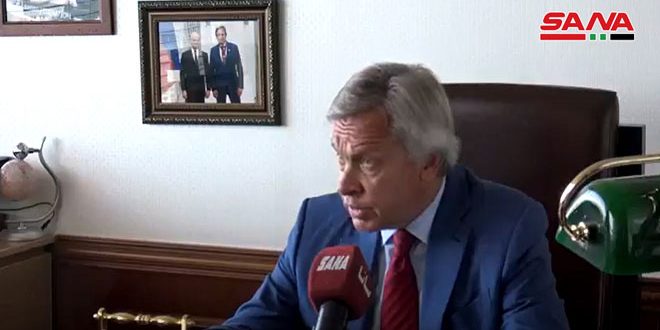 Moscow, SANA – Chairman of the Commission on Information and Media of the Russian Federation Council Alexey Pushkov affirmed that presidential elections in Syria are necessary and very significant during the current stage.

Pushkov told SANA reporter in Moscow on Saturday that the presidential elections confirm to the whole world the real legitimacy of the Syrian state ,and strengthen the military victories against the armed terrorist groups on the Syrian territories.

He said that the Western countries’ refusal to hold presidential elections in Syria stems from the fact that these countries have nothing but hatred to Syria and its people, stressing that the Syrian people are the ones who determine their future and choose their leadership.

He added that pretexts invoked by the West for the illegality of the elections are null, as there are no principled grounds for considering the elections as contrary to the internationally recognized rules.

Pushkov pointed out that the Western countries have funded, armed and supported Daesh(ISIS) terrorist organization over the past years, and are continuing to do so as they have obstructed and continue to obstruct the return of all areas to the authority of the Syrian state.

He stressed that what the US and its allies are doing in Syria by stealing and smuggling the Syrian oil is nothing but desperate attempts to hinder the development of Syria.

He added that the West has lost the main battle after its terrorist agents had been defeated in Syria, and now it is waging diplomatic, media, and economic wars and the war of coercive restrictions.

“Syria has stressed that it is the strongest and has entered the stage of bolstering its victory over terrorism, and this gives it full political legitimacy by holding presidential elections,” Pushkov said.