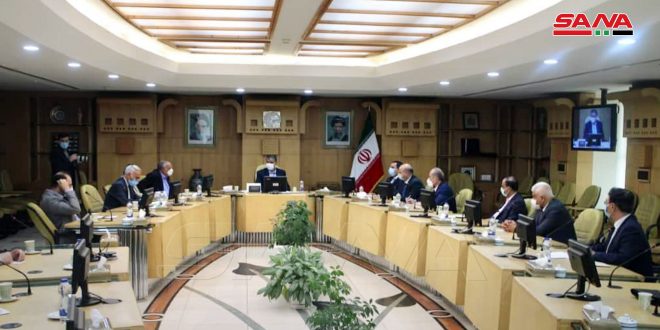 Tehran, SANA-Iranian Minister of Roads and Urban Development, Head of the Iranian-Syrian Joint Economic Committee, Mohammad Eslami discussed with the Syrian economic delegation prospects for strengthening bilateral cooperation and means of upgrading it to achieve a serious and fruitful cooperation that is needed for the upcoming stage.

The Iranian Minister stressed during the meeting that the two sides have completed works to facilitate trade exchange to overcome the impacts of the unilateral coercive sanctions against the two countries.

On the other hand, Eslami stressed that holding the presidential elections in Syria is a victory for it, hailing Syria’s firm political stance. Iranian Assistant Minister of Industry, Head of Iranian Trade Promotion Organization (TPO) Hamid Zadboum discussed, in a meeting with the Syrian economic delegation, prospects of bilateral cooperation in the fields that the Syrian sectors needed.

For his part, the Assistant Minister of Industry, Dr. Jamal Al-Omar affirmed the serious will to work and cooperate with the Iranian side and promote the level of industrial cooperation.

In turn, Syria’s Ambassador in Tehran Shafiq Dayoub stressed the necessity of implementing what has been agreed upon to enhance the bilateral cooperation and increase the volume of trade exchange between the two countries, indicating that the mutual visits open wider and comprehensive prospects for bilateral cooperation. In a statement to SANA reporter in Tehran, Eslami affirmed that the two countries have firm will to strengthen relations and cooperation between them, noting that a strategic contract was signed between the two countries and a joint chamber of commerce was established to introduce traders and industrialists to each other.