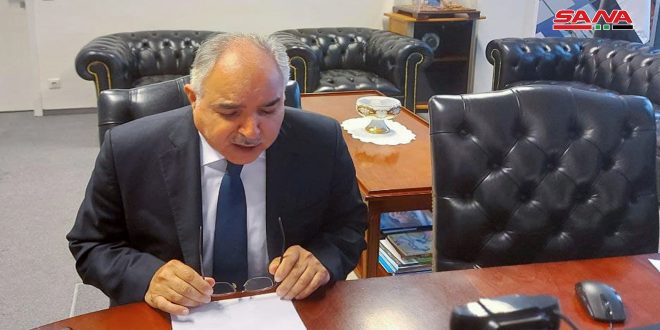 Vienna, SANA – Syria’s Permanent Representative to the UN in Vienna Hassan Khaddour condemned with the strongest terms the barbaric aggression, random shelling and killing of the innocents by the Israeli occupation entity against the Palestinian people in Gaza Strip and the occupation’s criminal practices in occupied Jerusalem and the rest of the Palestinian territories in a flagrant violation of the international law and the humanitarian law.

In a speech via video in the opening of the activities of the 30th session of the Commission on Crime Prevention and Criminal Justice held in the UN headquarters in Vienna, ambassador Khaddour called on the international community to adopt efficient and immediate steps to end the suffering of the Palestinian people, support their right in self-determination and establishment of their independent state with Jerusalem as its capital based on the UN relevant resolutions and to stop this Israeli aggression  which constitutes flagrant and blatant crimes against humanity.

In another context, Ambassador Khaddour stressed that the Syrian Arab Republic is a party in most of the international instruments concerned with prevention of organized crime, asserting that Syria is keen to update and develop its national laws in line with these international conventions.

He indicated that the Syrian government has issued during the past years a package of laws, including combating all kinds of crime, the latest one was Law no. 14 for 29,3, 2021 related to prevent smuggling of people and protecting the migrants.

Over the past ten years, the situation in Syria has changed when large numbers of the most dangerous and criminal members have entered Syria from different countries of the world backed by regional and international parties which funded, armed and provided the sophisticated communication devices for them, the Ambassador said, adding that these groups have committed all forms of crimes, including trafficking in human beings, human organs and sexual exploitation, destroying and looting the Syrian antiquities, many of which date back to more than 2000 years ago, as well as stealing the  heritage monuments.

Syria aspires that the Drugs and Crime Office will largely involve in the work and cooperation with it, particularly following that the terrorist works which targeted the civil status departments have led to massive destruction of the infrastructure of them and the stealing of the Identity cards and passports which were used by the terrorist groups, he went on saying.

The Ambassador concluded by saying that the war against Syria and imposing of unilateral conceive economic measures on it by the EU and the US have led to waves of displacement of the Syrians to the neighboring countries which caused the increase of phenomena of trafficking with human beings, particularly children, and other crimes which necessitate setting a serious and immediate work plan to protect the Syrians who have inhabited these camps and help to bring them back to their homeland and lift the illegitimate measures in a way that helps in ensuring  livelihood and development conditions for them.