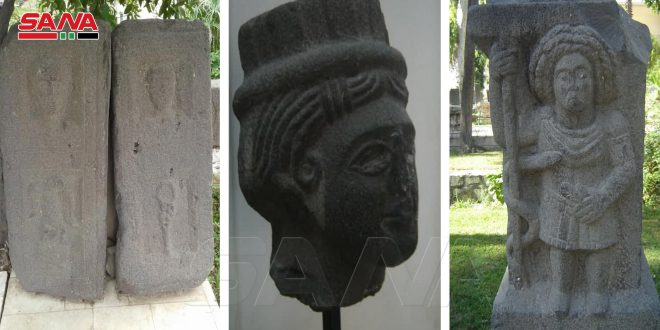 Swieda, SANA-The basalt stone carvings that decorate the garden of the National Museum in Damascus are one of the most important factors of the ancient Syrian civilization, which represent vivid evidence that Syria is the cradle of civilizations.

Among those artworks that are considered part of the archaeological heritage in the southern region of Syria are three sculptures of Jabal al-Arab origin, each symbolizes a profession of trade, medicine and pharmacy, and each of them has its interpretation and myths.

Khaled Kiwan, a researcher in the archeology of the region and the head of the Damascus University branch in Sweida, told SANA that one of those carvings consists of two shutters at the door of “Hilles”. At the bottom of the right leaf there is an image that represents God “Hermes” or the so-called God of commerce, who is the Lord of merchants and money and protector of roads and caravans, pointing out that Hermes was originally one of the names of the planet Mercury, a mythical Greek figure and the name of one of the prominent Greek gods.

As for the second sculpture, according to the researcher Kiwan, it represents the god of medicine in Greece, as the ancient Greeks believed that “Asclepius,” which in Greek mythology, the god of medicine and the son of the god “Apollo”, was learned by “Hermes,” indicating that “Esculab” is an ancient Arab god and its well-known symbol is the snake, and his worship spread to the Syrians as “Aximon”, which is the god of wisdom and medicine in Mesopotamia among the Sumerians, the worship of this deity was based next to the springs and in his temple was the worship of the snake, which is the symbol of life.

Kiwan points out that the third sculpture represents the goddess “Higa”, daughter of the god “Asclepus”, the goddess of cleanliness and it symbolizes pharmaceutical profession whose motto is a cup and the snake, it was depicted in ancient statues while holding a cup with a snake secreting poison to be used as medicine, indicating that these professions were associated with the gods being sacred professions based on honor, devotion and honesty.

The National Museum of Damascus embraces several monuments from Jabal al-Arab, the most prominent of which are mosaic paintings from Shahba city.

2021-05-11
m.eyon
Share
Previous Tribes and clans of Shammar, al-Khwatneh and Dulaim call for expelling US and Turkish occupation forces
Next 27 Palestinians, including 9 children martyred, more than 100 injured in Israeli aggression on Gaza Strip 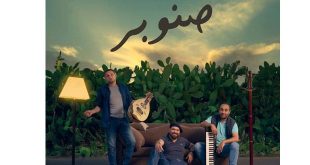