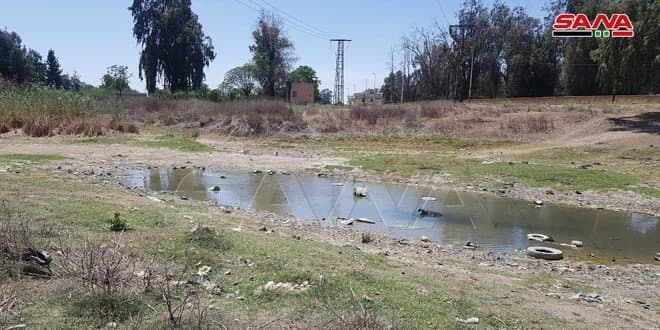 Damascus, SANA – Minister of Water Resources, Tammam Ra’ad, discussed on Tuesday with Iraqi counterpart, Mehdi Rashid al-Hamdani, developments related to the procedures of the Turkish regime that led to depriving of the downstream states, Syria and Iraq, from water imports of the Euphrates and Tigris rivers.

During the meeting which was held via video technology, the two minsters discussed the joint efforts that should be taken to pressure Turkish regime to stop its measures in the two rivers.

The Iraqi minister clarified the volume of the suffering that Iraqi people endure due to the shortage of water imports in the Euphrates and Tigris rivers because of the Turkish measures taken during the past period.

He pointed out that Iraq has taken a lot of procedures on several levels to increase water supplies in the two rivers.
Minister Raad, for his part, presented efforts exerted by the Syrian government through communication with friendly countries and international organizations to press the Turkish regime to retreat its measures that harm the two brotherly countries, Syria and Iraq, stressing the importance of intensifying their efforts in this field.

The two sides stressed the deeply – rooted relations between Syria and Iraq, and agreed to raise the level of coordination and exchange of technical information in the interests of the two countries.