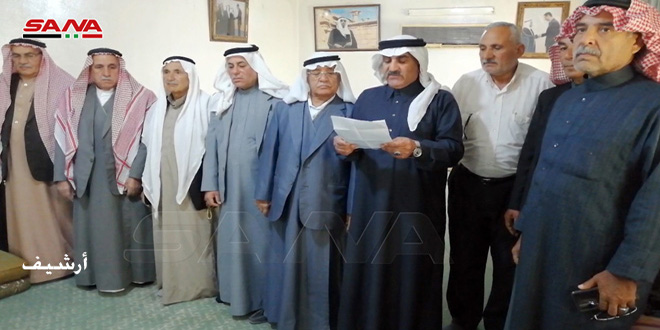 Hasaka, SANA- Arab tribes and clans in the Syrian al-Jazeera region have condemned the illegitimate presence of Turkish and US occupation forces and their mercenaries who assault the citizens and plunder Syria’s wealth, including oil, wheat and others.

In a statement to SANA, the Arab al-Juhaish tribe denounced the occupation of a huge part of the Syrian Arab territories by the Turkish and US forces, expressing its categorical rejection of the illegitimate foreign presence and the acts of stealing and plundering the homeland’s resources, including wheat, oil and archeological monuments.

The statement also affirmed support to the popular resistance to expel the foreign occupier, and called on all members of tribes who are involved in the QSD militia ranks which is subordinate to the US occupation to leave the ranks of these gangs.

Through the statement, the tribe called for actively participating in the presidential elections and electing the candidate who is able to lead Syria and who will be a guarantor of Syria’s territorial integrity.

In turn, Tai tribe, in a statement, said that the tribe, in its all religious, economic, scientific, professional, cultural and social figures and all its members will actively participate in the presidential elections on May 26th.

Sheikhs, dignitaries and members of al-Bakkara tribe condemned the US illegitimate presence and the acts of theft and plundering the country’s wealth, in addition to imposing a siege on the locals and intimidating them.

Members of the tribe called on International Community and the UN to implement the international legitimacy and speed up the expulsion of the Turkish and US occupation forces as they are the main reason behind the instability of the region.

Al-Jabbour tribe denounced the Turkish and US occupation forces’ crimes against humanity, such as stealing and plundering the people’s capabilities and the national wealth, in addition to the repeated attacks against the citizens in an attempt to sow panic among them and push them to leave their lands.

They called on the International Community to pressure the two occupations to expel them from the Syrian territories, and continue to stand by the side of Syrian Arab Army in its battle against the terrorists and their mercenaries.