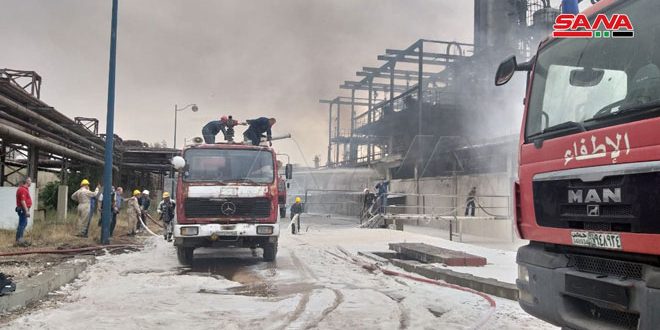 Homs, SANA- Homs firefighters extinguished on Sunday a fire that broke out in the distillation unit 100 in Homs refinery as a result of a leak from one of the crude oil pumps.

Minister of Petroleum and Mineral Resources, Eng. Bassam Tomeh, stated that a leak occurred during the transportation of crude oil between two towers is the cause of the fire, as the oil is heated before entering the distillation tower by about 350 degrees and as a result of its high temperature, its leakage to the outside and the overheating of the pump body, fire broke out.

Minister Tomeh added in a telephone call with the Syrian TV channel that Homs refinery has not stopped working, as it contains three distillation units other than the unit / 100 /.

Director of the Refinery, Eng. Suleiman al-Mohammad, said in a statement to SANA’s reporter that the firefighting teams, with great efforts, were able to control the fire, and that as soon as the fire broke out, the fire department at the refinery was called and asked for support from Homs fire brigade and the civil defense branch and to take all necessary measures to isolate the area of fire as the fire was brought under control.

Al-Mohammad added that four firefighters suffered suffocation, and they were rushed immediately to the hospital and they are now in good health.

In turn, Commander of Homs Fire Brigade, Brigadier General Hassan Ammar, said that since receiving the report about the fire, the Fire Brigade’s members went to the place and worked with the Refinery Fire Department and the Civil Defense Branch to isolate the fire and to control it and then extinguish it and carry out cooling operations to prevent its renewal.

Homs Police Commander, Major General Mohammad al-Faouri, indicated that the internal security forces patrols were directed to the refinery area after receiving the report about the fire, to carry out traffic regulation operations to facilitate the arrival of firefighting vehicles to the place as the refinery is located at the western entrance to Homs City, which witnesses heavy traffic in the morning. 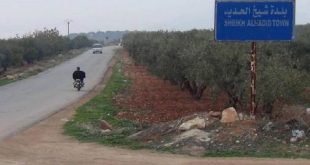 Aleppo, SANA-Turkish-linked terrorist organizations have seized agricultural lands and a number of houses in Tadef …