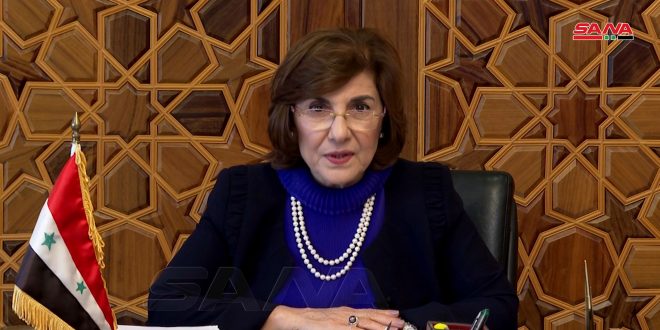 Damascus, SANA-Special Advisor at the Republic Presidency, Bouthaina Shaaban, stressed that Syria has waged twin war which has two faces, the first one is human and the other is media through a campaign launched by western media that lost credibility.

Shaaban, in an interposition during its participation in a conference via video organized by German Schiller Institute for researches entitled “The Moral Collapse of the Trans-Atlantic World Cries Out for a New Paradigm” revealed leaked British documents which prove that the United Kingdom funded groups of Syrians who called themselves as “witnesses” and that the western governments were exerting pressure on Syrian officials to dissent from the government.

“All what happened in Syria of destruction, death and displacement, were because of Western intelligence institutions which, in cooperation with Turkey, trained thousands of terrorists to achieve a single goal which is destroying Syria”, the Advisor added, asserting that the western forces were and still are dealing with Syria as if it is still under their colonization, ignoring its deep-rooted history and values.

Other participants in the conference stressed that the sanctions imposed on Syria amount to war crime and contradict the Islamic and Christian values and they prove that the West’s claim that it is keen on democracy and human rights has no value with its silence towards these sanctions and its cooperation with those who imposed them.