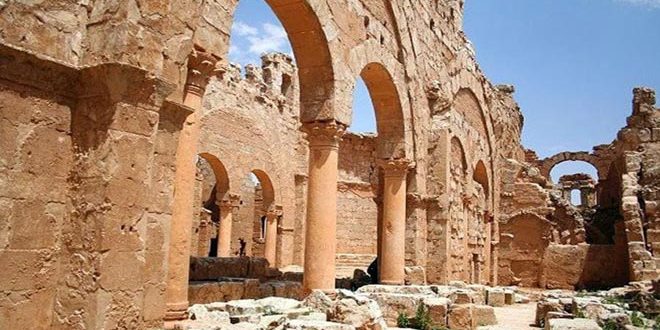 Damascus, SANA –  Asis mountain is located in Syrian al-Hammad volcanic region to the south-east side of Damascus, forming part of Houran mount. The name was discovered in a carved text on basalt rock dating back to the Umayyad era and it is now preserved in the National Museum of Damascus. The site is nearly 100 km to the south-east of Damascus city and it is administratively affiliated to Douma region. Archaeologist, Mahmoud Hammoud, says that historian Yaqut al-Hamawi mentioned the mount in Mu’jam al-Buldan (dictionary of the countries), describing it as a shrine for Umayyad Caliph al-Walid Ibn Abd al-Malik.

As for the archeological works that took place in the site, Hammoud added that the German expedition was the first team who carried out excavations in 1962. The team discovered that ruins of Asis mount were one of the most important sites which represent the Umayyad desert architecture that is still preserved until today.

One of the most important remains of the site is the palace which is considered as one of the oldest palaces of Umayyad era in the desert which extends on an area of 300 meters, it is also one of the oldest Islamic buildings in which plaster decoration was used. The palace includes a mosque and a bath, which is the oldest building of an Islamic bath built outside the cities.

The rocks surrounding the site contain various writings and ancient languages in addition to the Arabic language.