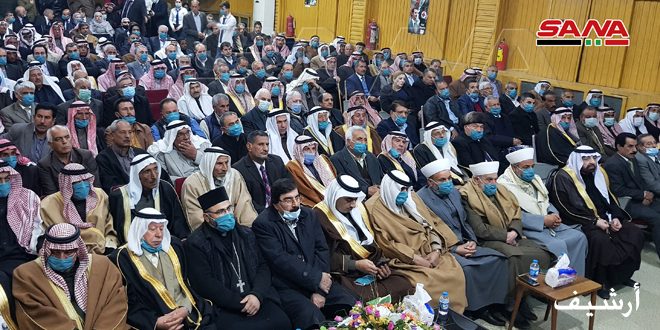 Hasaka, SANA – Elders and dignitaries of Syrian tribes and clans strongly condemned aggression, and brutal and random bombing by US backed -QSD militia against people of Tayy neighborhood in Qamishli city, denouncing razing the houses to ground on the safe people and sniping of innocent ones and displacing people from their houses to implement US occupation’s agendas.

In statements issued on Saturday, elders and dignitaries called on sons of the clans to activating popular resistance to expel the occupation from the Syrian land, affirming that clans’ adherence to Syria’s unity and sovereignty and territorial integrity , in addition to rejecting all domination forms and division schemes in which the enemy and its tools seek to .

The statements also warned that the crimes of QSD militia destabilize the region, especially that QSD well realizes the importance of Tayy neighborhood in Qamishli.

Elders and dignitaries of Syrian tribes and clans Tayy neighborhood 2021-04-24
shazaa
Share
Previous Alouk water station to be operated again in Hasaka after a16 -day of hiatus due to attacks by Turkish occupation and its mercenaries
Next Masses, prayers and blood drive in Aleppo to commemorate 106th anniversary of Armenian genocide