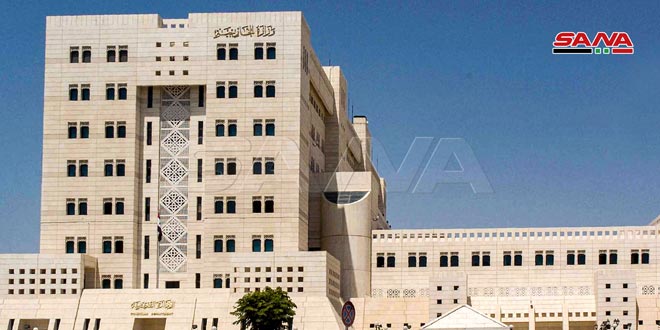 Damascus, SANA -Syria strongly condemned decision which was passed on Wednesday by Western countries at the 25th session of the Conference of States-Parties in the Organization for the Prohibition of Chemical Weapons against Syria, stressing that it constitutes a dangerous development in the organization’ track and contradicts its charter.

“The Syrian Arab Republic condemns, in the strongest terms, the hostile approach embodied today in the work of the twenty-fifth session of the Conference of the States Parties in the Chemical Weapons convention, as western countries, especially the US , Britain and France practiced the most heinous methods of blackmail, threats and pressure to pass a Western decision against Syria in a dangerous precedent in the history of the organization.” a statement by Foreign and Expatriates Ministry said.

The ministry added that 45 % of the countries parties to the Chemical Weapons’ Convention out of 193 countries voted in favor of this illegitimate decision, and this reflects the fact that this decision does not represent the majority of the member states in the Organization, and it is inconsistent with its usual procedures.

The statement added that makers of that illegitimate decision have deliberately ignored the great efforts exerted by Syria during eight years, since its voluntary access to CWC, and the unprecedented cooperation it has showed with the Organization teams.

“The decision is a message that comes in the context of the western direct support for the terrorist groups in Syria, and it is an encouragement to terrorists to go ahead in their crimes, including the chemical crimes, perpetrated by these groups in all incidents witnessed in Syria against civilians,” the statement concluded.