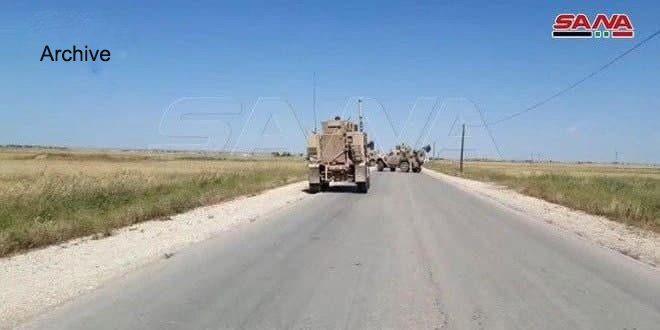 Hasaka, SANA-The US occupation forces brought in a convoy loaded with weapons, ammunition, logistic materials and several armored vehicles to their bases in al-Shaddadi in Hasaka countryside.

“A convoy consisting of 24 trucks belonging to the US occupation entered on Sunday through illegal al-Walid crossing to the Syrian lands,” local sources in al-Suwaidia village in the countryside of Yarubiyah said.

The sources added that the convoy was loaded with weapons, ammunition, refrigerators and tanks and headed from Rmeilan via the international road to Qamishli and then to the occupation bases in al-Shaddadi in the southern countryside.

2021-04-18
Mhamad
Share
Previous Syrian Students in Bulgaria reiterate standing by their homeland in face of terrorism
Next A girl passes away, four people injured in gas cylinder blast in Mezzeh 86, Damascus