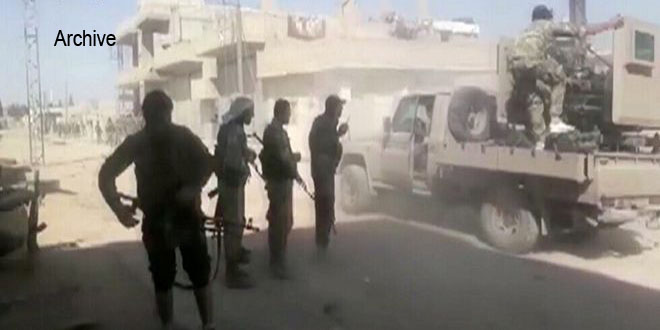 Aleppo, SANA- Terrorist organizations continued their infighting in regions they have occupied in cooperation and direct support of Turkish occupation forces north of Syria as clashes erupted on Saturday evening between terrorist groups affiliated to the so called Failaq al-Sham ( al-Sham Legion)  terrorist organization,  on the background of distributing  influence and controlling the illegitimate crossings  in Afrin area, in the far northwest of Aleppo province .

Local sources told SANA that fierce infighting has erupted between terrorist groups affiliated to the so called Failaq al-Sham (al-Sham Legion), backed by Turkish occupation in Afrin area, causing roads and villages to be cut off for several hours in the area, in addition to material damage to the citizen’s properties there.

The clashed caused injuries among Turkish occupation – backed terrorist ranks in the occupied city of Ras al-Ayn in the northwestern countryside of Hasaka.