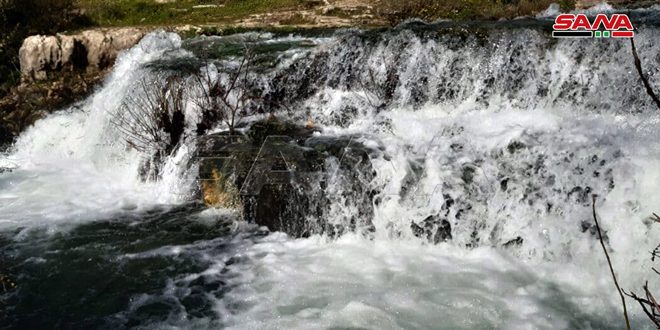 Tartous, SANA – Al-Ghammqa spring is considered as one of the charming tourist destinations in al-Jarweya village in Safita northern countryside, Tartous province, particularly in winter and spring seasons where the area surrounding the spring turns into a place crowded with visitors seeking to relax in the atmosphere of attractive nature.

Director of al-Jarweya municipality, Ghali Isber told SANA that Ghammqa Spring is 30 km from Tartous city and 3 km from Safita, pouring out from a natural limestone rocky basin.

He noted that the spring is seasonal, since it floods in winter and dries up in summer.

The spring is famous for its water abundance, and has several offshoots, the most important of which is the Fawar Spring, flowing from the bottom of earth vertically with great plenty to descend to its track, in addition to others offshoots such as al-Rozana, Labos, and Beit Wasouf, according to Isber.

He added that the spring was expanded by sculpture to pour directly into a stream in Abu Yabis River to continue its way  towards the estuary at the southern entrance of Tartous city.

According to Isber, the spring has three tributaries, including the main northern spring and Beit al-Anjari, all of which come out from rocky caves under the ground and rain floods.

In the southeastern side of the spring, there is a small hill covered with terebinth, acron and oak trees called Jibibat.

A number of archeological sites are distributed along the rivers banks, , and there are several watermills, including that of Sheik and al-Shehab which date back to the Roman and Byzantine period.

Besides the spring, there is Ghammqa cave which was formed by natural structure , including separate and huge corridors, in addition to an ancient water well dug in the rock from the eastern side of the spring about 150 meters away from it.

The cave and well are connected to each other under the surface of earth, as many people of the region believe, and near the well there is a basin, carved in the rock with 160 cm length , which was used for watering the livestock.

Isber added that there is a rocky cave called Beit Wassouf, and the water appears in the both caves.