Sweida city… a museum under the open sky 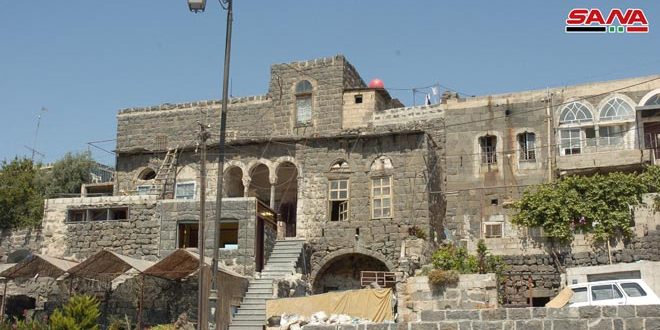 Sweida, SANA- Once a visitor walks into neighborhoods of city of Sweida, he finds himself in an open-air museum that has a lot of imagination as the city has passed through many civilizations, the oldest of which dates back to the 2nd millennium BC. According to Hassan Hatoum, a researcher in the region’s antiquities, the city preserves a variety of buildings of the Nabataean, Roman and Byzantine style, the most prominent of which is the great church whose façade overlooks the central street directly in the city center which dates back to the sixth century AD,  the city wall, its castle, the governor’s palace, and Canaanite and Aramaic residential elements have been uncovered over the past years within the northwestern neighborhood of the old city.

Hatoum added that the city, home to the old man since to the second century BC, is distinguished by its Nabataean temple and al-Hajj pool within the eastern neighborhood that dates back to the end of the Hellenistic and pre-Roman era, the great theater, the small theater (Odeon), a cathedral, and the small church within the southern neighborhood.

Hatoum went on to say that the ancient Najma Street is one of the most important and oldest streets which includes archaeological and tourist attractions in the old city in Sweida.

According to the researcher in the archeology of the region, during the past years, the southern part of the ancient Western Sweida Gate, west of al-Najma roundabout area, was discovered, which dates back to the Nabataean Roman period, in addition to revealing the lower left part of the ancient gate of As-Suwayda city, which date back to the end of the first century AD.

These archaeological discoveries confirm that the ancient city of Sweida is an integrated city that is somewhat similar to Busra city terms of the presence of gates, walls, public service buildings, theaters and ancient baths.