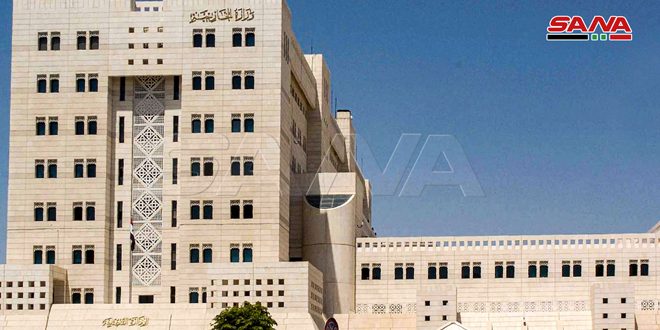 Damascus, SANA- The Foreign and Expatriates Ministry demanded the Security Council to shoulder its responsibilities in the framework of the UN Charter and to take firm and immediate measures to prevent the repetition of Israeli acts of aggression on Syrian territory.

In a letter addressed to the UN Secretary-General and the Security Council President, the Ministry said: “At 10:42 p.m. on Wednesday February 3rd 2021, the authorities of the Israeli enemy repeated the aggression on the Syrian territory through launching successive waves of missiles from the direction of the occupied Syrian Golan on the southern region.”

It added “The Syrian Arab Republic affirms once again that the continuation of “Israel” in its dangerous acts of aggression which have become systematic policies whose officials are brazenly competing to announce them and justify them under flimsy security pretexts that do not deceive anyone, will not be the umbrella under which the Zionist entity hides to justify its terrorist behavior which it has become accustomed to, taking into consideration that it still occupies our land without any measure by the UN or the international community to hold it accountable for its continued savage crimes against our people in the occupied Syrian Golan and in Palestine and other Arab territory which it occupies in violation of the provisions of the international legitimacy, the UN Charter, the international law and the human rights instruments.”

The Foreign and Expatriates Ministry continued that Syria affirms that it will continue with determination and confidence its principled and firm approach in combating terrorism, including the terrorism which is backed by “Israel” and its allies, and that its army is determined today more than ever to continue its steadfastness in combating the remnants of terrorist organizations across Syria, and it will prevent them from continuing to achieve their goals in spreading terrorism in the region, and targeting the innocent civilians, adding that all the Israeli acts of aggression which have been applauded by those terrorist organization and those who stand behind them, will not succeed in intimidating the Syrian people or preventing them from achieving their goals, but they will increase their determination and their belief in the inevitability of victory.

The Ministry renewed Syria’s demand that the Security Council assume its responsibilities within the framework of the United Nations Charter, the most important of which is the maintenance of international peace and security to take firm and immediate measures to prevent the recurrence of these Israeli terrorist attacks, and to oblige Israel to respect its resolutions which are related to the Separation of Forces Agreement and to hold it accountable for its terrorism and crimes against the Syrian people, which as a whole constitute  flagrant violations of the United Nations Charter, the provisions of international law, Security Council resolutions no. 242, 338, 350 and 497 and all international resolutions and instruments related to combating terrorism. 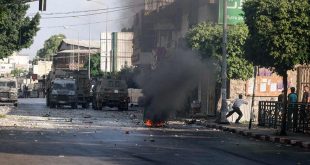