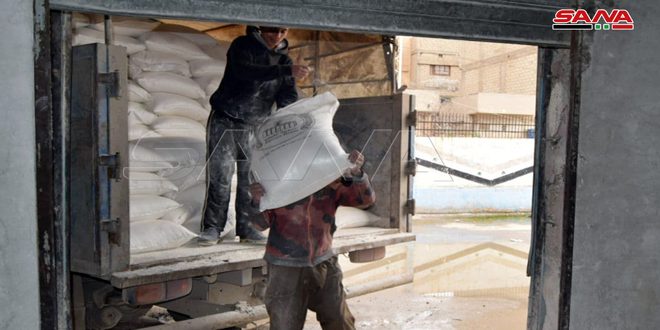 Hasaka, SANA- 18 tons of flour entered on Thursday al-Masaken bread facility in Hasaka City after 9-day stoppage due to the unjust siege imposed by QSD militia on the city center, and the continued stoppage of public and private bread facilities.

In a statement to SANA reporter, Member of the Executive Office of the Economy and Trade Sector Department in the province, Satam al-Huwaidi said “on Thursday, 18 tons of flour entered the first bread facility in Hasaka city center, and instructions were given to operate the bread facility and start production at full capacity to secure bread for the locals.”

He indicated that there are “additional quantities that are being loaded now to send them later to al-Baath bread facility in Qamishli to operate it and start production.”

For his part, Director of al-Masaken bread facility in Hasaka, Ali al-Dimas, said in a similar statement that “a quantity of flour entered the bread facility after 9-day stoppage due to preventing the entry of vehicles and the siege imposed on Hasaka city center”.

He pointed out that the bread facility will restart immediately to produce bread and secure it for citizens.

On Tuesday, the measures to lift the siege imposed by the US-backed militia on the city center of Hasaka and the Halkou and Tayy neighborhood in Qamishli began about 20 days after QSD militia imposed its unfair siege on the two cities and prevented the entry of vehicles, means of transport, food supplies, water tankers, and other basic needs, such as flour and fuel, and prevented them from reaching the locals.