Damascus, SANA- The Syrian Olympic football team starts its first training camp on Dec. 20 as the Football Union called upon its technical and administrative cadre and the footballers to join the closed camp in preparation for the qualifications of AFC U-23 Asian Cup.

The list of the team included Fayssal al-Ali who will be the supervisor of the team, Muwaffaq Fathallah as administrative general director, Mohanad al-Faqir as a technical director, Abdullah Droubi and Mustafa Rajab as assistant coaches and Nafi’a al-Ali al-Huwaij as goalkeepers’ coache.

The national Olympic team will play in the first group of the qualifications along with the teams of Uzbekistan, India and Bangladesh. 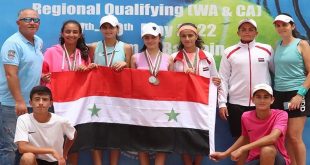 Manama, SANA- With 2780 points, Syria’s tennis team has won the first place in the …