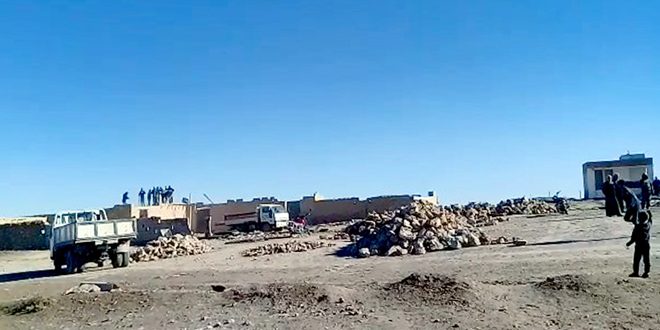 Hasaka, SANA_ The US-backed QSD militia has displaced a number of civilians in the vicinity of al-Hawl camp, which includes families of Daesh terrorist organization and completely demolished their homes.

Local sources in the area told SANA reporter that QSD militia demolished and bulldozed homes in the vicinity of al-Hawl camp after forcibly removing their owners from them using bulldozers and a number of engineering vehicles.

They also seized all orchards and agricultural lands in the vicinity of the camp in order to use them for military purposes in implementation of the agendas of the US occupation.

The sources added that the militia carried out the demolition operations without prior warning to the people, pointing out that these violations came under the pretext of securing the vicinity of al-Hawl camp after the militia’s inability to control it from the inside, which is a new pretext to seize homes and expel residents and turn their homes into military headquarters.

No one has the right to object, and whoever objects will be kidnapped or killed, according to the sources.

A young man from the region told SANA that QSD militia bulldozed a number of houses of the Sultan’s family and demolished about 17 rooms within their homes in addition to bulldozing garages for vehicles and a diwaniyya for receiving guests and a stable for purebred Arabian horses, describing the violations as a systematic displacement by the militia.

The young man pointed out to the state of general dissatisfaction among the people in the region amid anger over what the militia is pursuing against the original people of the region and its attempts to bring mercenaries linked to it, paying no heed to the rights of citizens.

He called for the intervention of all parties and United Nations bodies operating in the region to stop the militia’s violations of civilians’ rights, respect them and to not seize their property.

During the current year, QSD militia seized many houses in Hasaka city and expelled their owners from it at gunpoint with the aim of housing its members there and turning them into headquarters.

Civilians were expelled from about fifty houses by the militia, in the neighborhoods of al-Salhia, Ghuwairan, al-Zuhur and youth housing, under groundless pretexts.