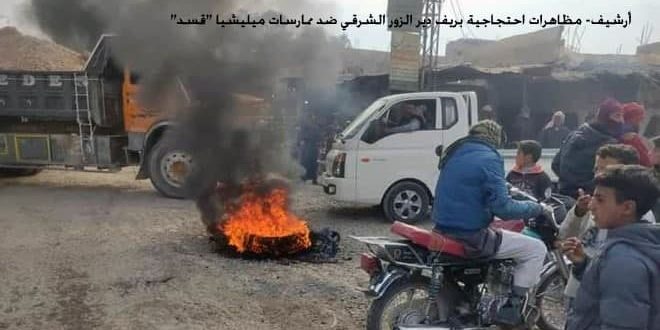 Deir Ezzor, SANA-  A number of US occupation-backed QSD militia gunmen were injured in detonation of an explosive device in Deir Ezzor eastern countryside.

Local sources told SANA reporter that an explosive device, which was planted by unknown persons on one side of al-Omar Oil field road in Deir Ezzor Eastern countryside, went off while a military car affiliated to QSD militia was passing.

The explosion caused the injury of a number of QSD militia gunmen and material damage to their car.

On Friday, two QSD militia gunmen were killed and others were injured in various attacks by unknown persons against their movements and checkpoints on al-Mankhar and-al-Salhabiya roads and near the roundabout of al-Safsafa, west of Raqqa.