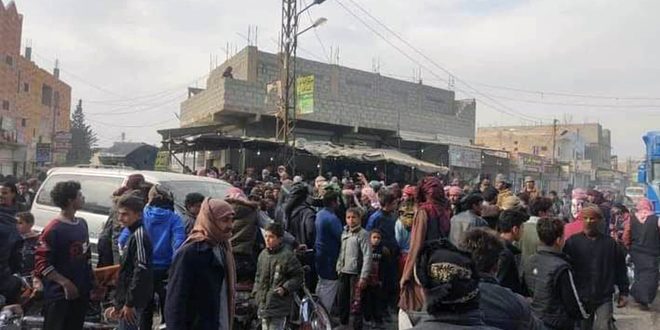 Deir Ezzor, SANA- locals in Deir Ezzor  eastern countryside protested on Saturday against practices of US occupation –backed QSD militia and in condemnation of  stealing  the oil resources in Syrian al-Jazira.

Local sources told SANA reporter that people of Deir Ezzor eastern countryside protested at al-Quhawe crossroad in Abo al-Hamam town against practices of QSD militia and its suppressive practices and its dominance over the region capabilities and its resources, which are the right of citizens in addition to increasing the extortion operations practiced by the militia

The protestors who cut off main roads in the region amid of general strike and closing the commercial shops, called for putting an end to QSD practices and confiscation of the livelihood and people’s properties in addition to looting the oil and smuggling it.

Several regions in countryside of Hasaka and Deir Ezzor have been witnessing protests in condemnation of QSD crimes which caused the martyrdom and injury dozens of them, in addition to kidnapping many locals of villages in Deir Ezzor countryside.