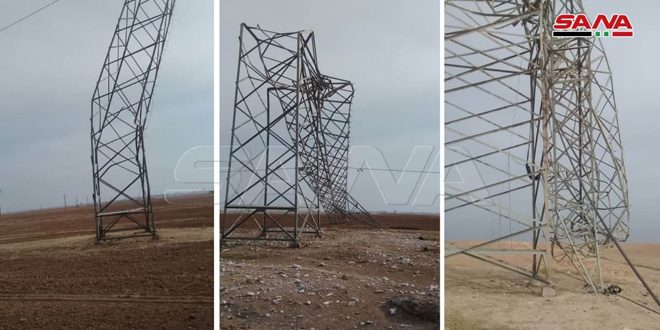 Hasaka, SANA- Two electric towers were collapsed and another one was damaged on Tabqa- al-Bwab 230kV Transmission Line on Saturday, causing the electricity feeding cut off from Hasaka Province.

Director of Hasaka Electricity Company Anwar Okla told SANA in a statement that the collapse of the two towers, southwest of the Province, was a result of the damaged affected them due to terrorism during the past years.

Okla pointed out that the Company’s maintenance workshops headed to the site to assess the needs for the maintenance works, start works as soon as possible and restore service to the citizens in the province.

Last week, Hasaka Electricity Company completed maintenance of a number of medium and low electric transmission lines in the cities of Hasaka and Qamishli and their countryside.