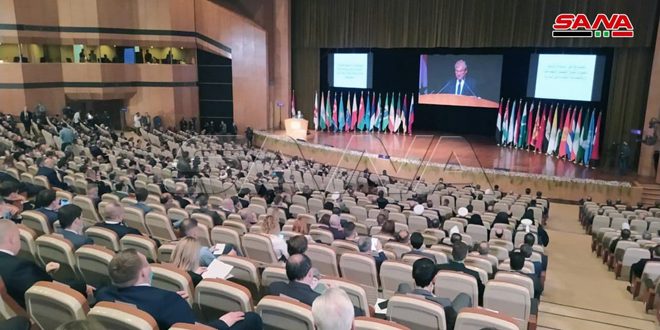 Damascus, SANA- Russian Foreign Minister Sergey Lavrov, affirmed that solving the crisis of the Syrian refugees entails the participation of the international community and stopping the politicization of this file, indicating that these states bear the responsibility for the suffering of millions of the Syrians who have been forced to leave their homeland.

In a speech during the opening of the Int’l Conference on Return of Refugees, delivered by Russian President’s Special Envoy for Syria Alexander Lavrentiev, Lavrov noted that holding the conference, which Russia has co-organized, comes despite of the opposition of some states for that, and their attempts to politicize the issue.

He asserted that helping the return of Syrian refugees and the displaced to their homeland through the full respect for Syria’s sovereignty and territorial integrity according to the Security Council’s resolution no. 2254 is considered as one of the most important steps for guaranteeing the long-term stability in Syria.

Lavrov affirmed that some states continue to support the terrorist organizations in Syria and they politicize the issue of the Syrian refugees who have been forced to leave their homeland, saying “The states which have failed in toppling the Syrian Government practice financial and economic strangulation measures, and they take restrictive illegal measures that hinder providing aid to the refugees and the displaced.”

Lavrov described these measures as unconstructive and inhuman, indicating that rejecting to attend the conference by some states, on top the US proves the double standards adopted against Syria for achieving their selfish geopolitical interests.

He added that this stance is not surprising by states which directly participated in igniting the war in Syria and which have provided and still provide support to terrorist organizations, pointing out that solving the problem of the refugees entails providing a decent livelihood for millions of the Syrians which requires an effective participation by the international community as a whole.

Lavrov said that Russia continually provides support to Syria, and it exerts efforts to make a large number of states and specialized organizations participate in the construction of the vital places of the infrastructure which has been destroyed in Syria.

He expressed hope that millions of the Syrians will be able to return to their homeland soon, reiterating Russia’s readiness to contribute to this issue in all possible ways and its determination to continue to provide support to Syria in all domains.