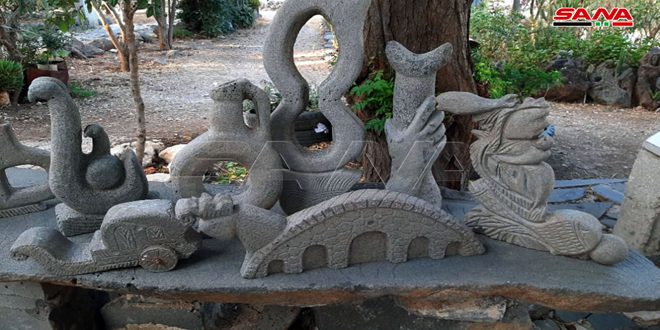 Daraa, SANA-  Seifo al-Jahmani’s love to sculpture has pushed him to transform basalt stones into models imitate the Horani environment, some of which imitate the environment of his ancestors and others highlight the reality of the current life.

With simple tools such as hammer and a chisel and other simple devices, al-Jahmani, an amateur from Nawa city in the countryside of Daraa, excelled in carving the basalt stone, which is distinguished by its hardness.

The sculptures vary and differ from each other, some of them are traditional and imitate the environment in which we live or which our grandparents had lived in the bygone eras and some others are cultural, sculptor al-Jahmani told SANA.

He said that some of the sculptures depict the suffering of parents and their efforts in the field of upbringing children, while others are of a decorative nature that can be used to beautify the entrances of houses, especially the old traditional houses, and some still preserve it until now.

Al-Jahmani emphasized that his beginnings were with painting and he turned to sculpture because he believed that sculpture does not disappear with the passage of years, unlike paintings that are affected by time, length of years and weather factors.

He explained that the length of the largest sculpture is about one meter and that he used basalt stones that are abundant in Houran, pointing out that he participated in many local exhibitions.

The researcher in the history and heritage of the southern region, Nidal Sharaf, explained that al-Jahmani adopted sculpture as a hobby, so he practiced it for years and created dozens of pieces of art that embody the life of the rural community.

He added that sculptor al-Jahmani was able, through his sculptures, to imitate reality, as he carved the wheat ears, tender mothers, historical figures, household heritage tools, animals and birds of the region on basalt stones.