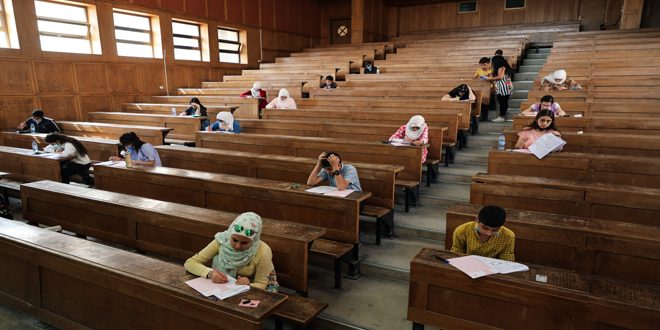 Damascus, SANA_ The second round of tests of the first phase of the Syrian Science Olympiad competitions for 2020 -2021was held on Saturday in all with the participation of 6235 students from the first secondary grade in the different governorates.

The tests, organized by the Distinction and Creativity Commission, were held at the same time and for an hour and a half in all governorates and focused on the subjects of biology and chemistry.

The central scientific committees in the Syrian Science Olympiad put the question forms. The test papers will be corrected in an automated and central manner by the specialized teachers.

Director of Syrian Science Olympiad at Distinction and Creativity Commission Noubough Yassin said that participation for the current season was limited to those who excelled in the basic education certificate who obtained 2800 and above.

She indicated that the aim of the first stage tests is to identify the extent of the student’s ability to logical analysis, and their results will be issued on the ninth of next month.