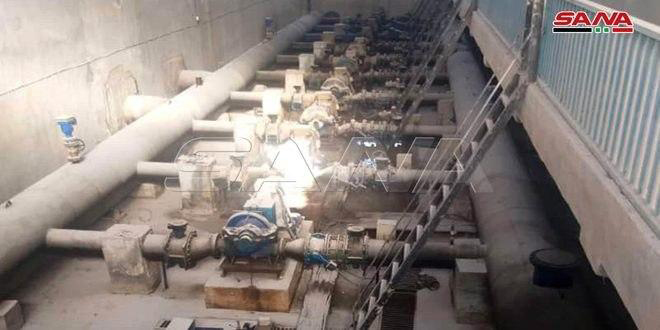 Hasaka, SANA- Maintenance workshops affiliated to the drinking water company in Hasaka Province have accomplished a number of repairing works in Alouk Water Project with the aim of putting it into service with full capacity soon.

Director of the Company Mahoud al-Okla told SANA reporter in a statement that the works included maintaining and installing six horizontal pumps, installing two electrical transformers with a capacity of 200 KVA, and 4 new water plunger pump, maintaining and installing 13 water plunger pumps, in addition to equipping and operating well No.  34 within the station, which is considered as one of the four wells which have been previously dug, but non-invested.

Al-Okla pointed out that the company continues to maintain Alouk project to put it into service with full capacity of 80,000 cubic meters of water per a day, while the production capacity now is estimated at 70,000 cubic meter which feeds Hasaka city and its western countryside.

The maintenance works have been carried out in cooperation with the Syrian Arab Red Crescent (SARC) and the International Committee of the Red Cross (ICRC) and the project includes 30 wells, 12 horizontal pumps in addition to 4 Non-invested well.