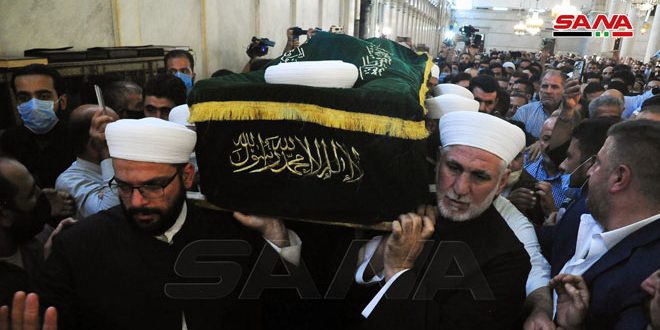 The funeral started from the great Umayyad Mosque in Damascus.

The Minister said that the martyrs have written with their blood and spirits the glory of their homeland.

“We don’t only present the martyrs from our Syrian Arab army; there were more than 70 martyrs from religious scholars, bishops and Christian clerics, all for the sake of the truth.

Al-Sayyed reminded of President al-Assad’s speech that the scholars have proved their patriotism and responsibility, and in this war they were subjected to tremendous pressures that no one was exposed to, but they remained firm and presented sacrifices and uttered the word of truth and based on that we call al-Afouyni as the martyr of word of truth. Sheikh Mohammad Adnan al-Afyouni, the Mufti of Damascus and it its countryside, was martyred on Thursday evening in a terrorist blast targeted his car in Qudssaya town in Damascus countryside.

Sheikh al-Afyouni is one of the most prominent scholars of Syria and the Islamic world, and he is a member of the Fiqh Scientific Council at the Endowments Ministry, Mufti of Damascus and its countryside, and General Supervisor of al-Sham International Islamic Center to counter Extremism.

A consolation Council was held on Friday evening at Sheikh Ahmad Kef taro complex in Damascus for the martyrdom of Sheikh al-Afyouni.

Dr. Ahmed Badr Al-Din Hassoun, the Grand Mufti of the Republic and a crowd of citizens and clerics participated in the event.