World Harp Day organized with participation of Syria and 5 countries 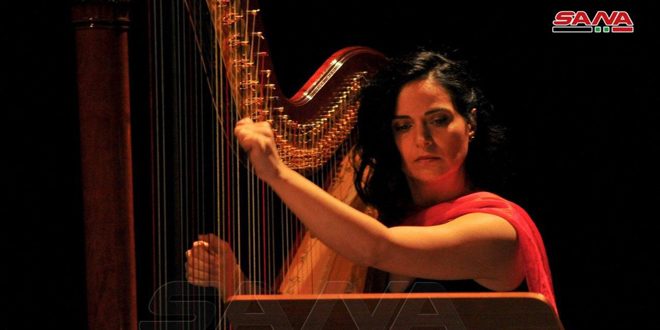 Damascus, SANA-Syria participated in World Harp Day through the musician Rahaf Shekhani along with musicians from around the world by performing musical pieces from several countries as each player presented work related to the culture of his country.

What distinguished the event in its first version is that Syria is one of its founders with five countries; Russia, Switzerland, China, Spain and America, and it was organized with the aim of introducing many cultures, styles and eras through musical instruments similar to harp throughout history from the historical Sumerian harp to the Iranian and Irish to the modern classical instrument Concert Grand, as well as the electric instruments.

Players of this instrument from 50 countries around the world participated in the event which was broadcast on the official event channel via the Internet from the Russian city of Saint Petersburg in an attempt to achieve a global cultural and human integration that took the character of a marathon where the broadcast time exceeded seven hours.

World Harp Day seeks to launch a wide musical movement that includes professional and amateur musicians through which they carry out activities in virtual space and street performances and organizing lectures to promote the concept of coherence of nations, preserving historical heritage and contributing to spread awareness and cultural, social and environmental values that contribute to making the world a better place.

In a statement to SANA, player Rahaf expressed joy to represent her country in this event, of which Syria was among its founders.

She indicated that the organizing team seeks to register the World Harp Day in the official record of the United Nations of Educational, Scientific and Cultural Organization (UNESCO).

She mentioned that this piece was filmed in Dar Al-Assad, with logistic assistance of the technical team.

Rahaf Sheikhani is a player in the Syrian Symphony and School of the Harp Instrument at the Higher Institutes of Music, and Solhi Al-Wadi. She holds a master’s degree from the Italian Conservatory of Santa Cecilia and a university degree from the Department of Visual Communication at the College of Fine Arts and participated in workshops with international harp musicians.