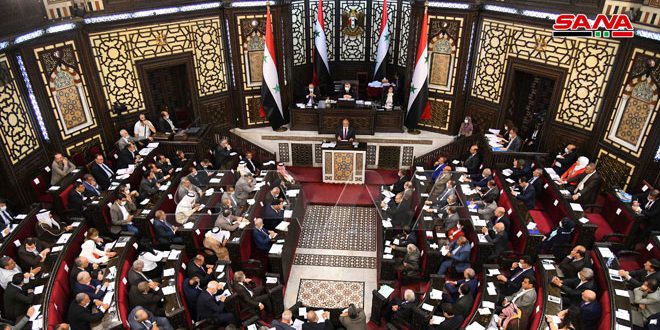 Damascus, SANA_ The People’s Assembly on Wednesday discussed performance of the Ministry of Agriculture and Agrarian Reform and issues related to its work.

The Assembly’s 9th session of the 1st ordinary round for the 3rd legislative term, chaired by Speaker Hammoudah Sabbagh, also discussed the Ministry’s procedures to compensate and support farmers affected by the fires recently erupted in a number of governorates.

Minister of Agriculture and Agrarian Reform Mohammad Hassan Qatana clarified that guidelines had been prepared in cooperation with a Farmers’ union to be distributed on the affected families in the coastal area to guide them how to deal with the damaged trees.

He touched upon the program approved by the Cabinet on Tuesday to compensate the affected farmers.

The Minister reviewed the major problems related to securing of agriculture production requirements as a result of unilateral coercive measures imposed on Syria.

In his response to interpositions, Minister Qatana talked about the shortage of vehicles in the Ministry as the result of sanctions and terrorism that destroyed various types of agricultural vehicles.

He announced that the ministry has / 6 / million forest trees, and an afforestation campaign has been launched under the title ‘Sons of My Family’ in which families participate and they are given trees for free.

A national program for the afforestation of the areas surroundings schools, universities and the institutes has been launched also in which the Syrian Student Union, the Youth of the Revolution and the Vanguards of the Baath participate, according to the Minister.