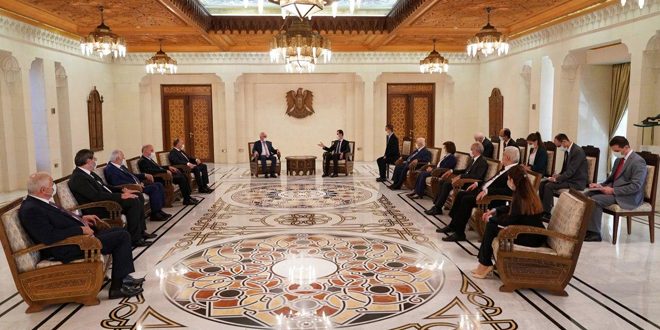 Talks during the meeting dealt with the bilateral relations, as President al-Assad expressed comfort over opening the embassy of the Abkhazian Republic in Damascus, affirming that this step would give a great impetus to the joint work and cooperation in different domains, particularly on the economic level, in addition to exploring new cooperation prospects.

Kvitsinia, for his part, affirmed his country’s keenness on building strategic and economic partnership between the two countries, indicating that the main goal of their visit is to push the cooperation relations and to continue to develop them in different domains in a way that would achieve the best interests of the two friendly peoples. The meeting also tackled the process of implementing the signed agreements between the two sides and the agreements and steps which are being prepared and which would constitute a solid basis for developing relations between the two countries and building them in the optimal way.

Viewpoints converged on the importance of enhancing the process of joint political coordination in a way that would contribute to supporting the issues of the two countries and facing the states which target their peoples.