October Roads Race for Bicycles kicks off in Lattakia 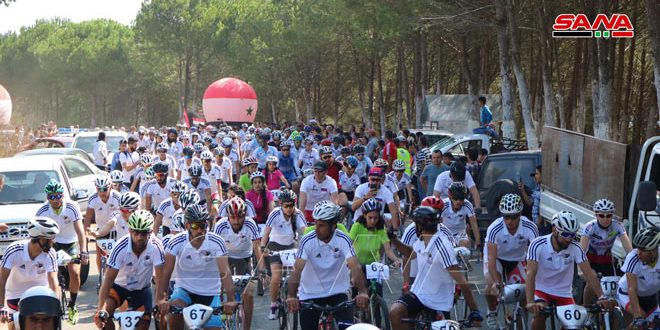 Lattakia, SANA- “October Roads Race for Bicycles” which was organized by the General Sport Federation in cooperation with the Ministry of Tourism, kicked off on Sunday in Lattakia countryside with a local, Arab and international participation. 165 bicyclists from Federal Russia, Tatarstan, Lebanon, Tunisia, Palestine and Syria participated in the 3-stage race which it will last to October 6th .

The first stage started from the village of al-Dalia in Lattakia countryside to the shrine of the late leader Hafez al-Assad in the city of Qardaha with 48 km long. The participants will pass through a number of villages, hills and plains along the track.

The second phase of the race includes a hike from al-Amer Restaurant roundabout in Qardaha to Slunfah town, as the race extends for about 32 km long, passing through many charming villages, hills, slopes and valleys. The participants in this stage will plant trees in a number of sites that were affected by fires, including the Shuh and Cedar Reserve. The final day of the race includes the mountain race which will be held on Joubet Burghal road with one-kilometer-long, then winners will be awarded at Nessma Jabal Hotel in the countryside of Qardaha.