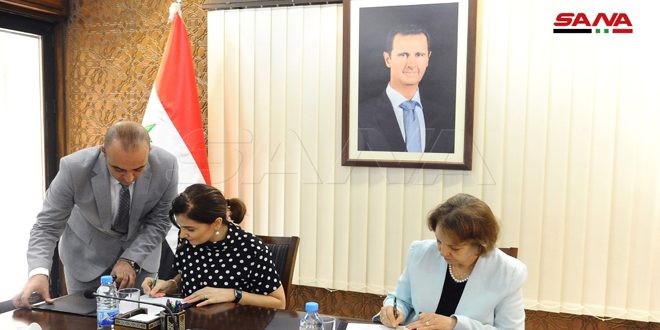 Damascus, SANA- To consolidate the presence of the culture among Syrian university youth and launching the aspects of creativity in them, a memo of understanding between the Culture Ministry and the National Union of Syrian Students has stipulated bolstering the role of culture with all its fields inside the youths to enhance the values of belonging and citizenship in a way that contributes to building a vibrant, strong and patriotic society.

The memo, signed on Thursday, aims at regulating the cooperation and coordination between the two sides in implementing the cultural projects and activities related to the society and the youth along with the mechanisms of engaging the local society with the aim of enhancing the citizenship approach inside the Syrian human being and spreading the culture with all its kinds; heritage, musical, visual in addition to the arts of performance.

It also stresses the cooperation within the available material capabilities of the two sides in carrying out the projects of cultural development and activity in addition to sharing the logistic support between the Ministry and the private and governmental universities for holding any culture or art activity along with providing the psychological support for the youths and strengthening the patriotic culture through conducting the creative and artistic activities aimed at strengthening the patriotism and citizenship.

The memo also stipulated for carrying out programs for training and building the capabilities of youths along with the training on some occupations and arts, in addition to conducting cultural workshops, competitions, matches, seminars, forums and celebrations.

The memo also includes enhancing the cooperation in carrying out the programs aimed at increasing the awareness of the importance of arts, literatures and the values of the material and intangible heritage in addition to sharing the information, statistics, studies, and expertise related to the activities of common interest. In a statement to journalists, Culture Minister Dr. Lubanah Mshaweh said that the memo prepares for a fruitful future cooperation between the ministry with all its institutions and branches and the National Union for the Syrian Students, asserting that the ministry intends to spread the culture and what it holds of values and principles throughout all the country, in particular the belonging and the citizenship, as it will go ahead in carrying out the executive schemes.

In turn, Head of the National Union for the Syrian Students Darin Suleiman said that the memo expresses joint visions between the union and the ministry in the context of enhancing the culture, especially after most students were affected during the war on Syria