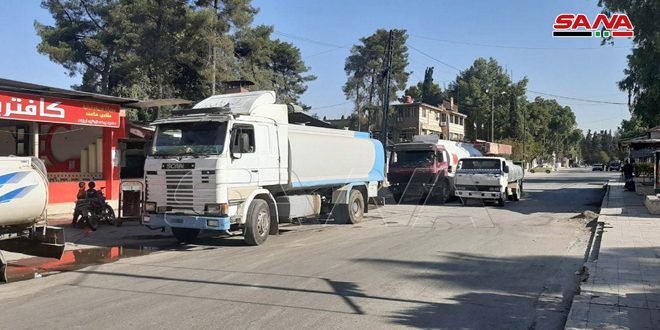 Hasaka, SANA- Cutting off water supply to about a million civilians in Hasaka is a crime which Turkish occupation forces and their mercenaries of terrorists have continued to repeat it ,with absolute silence of the international community that claims to defend human rights while situation of locals of Hasaka is deplorable for the ninth day in row due to the continuous cutting off water, endangering the lives of more than a million civilians to thirsty. The government bodies strive to provide access to clean drinking water for locals of Hasaka city in order to alleviate their suffering as much as possible according to available resources where Hasaka Council City, in cooperation with the civil society ran a number of water tankers to provide the locals with drinking water from Nafasha and al Himah Water Projects.

Chairman of Hasaka City Council Adnan Khajou, in a statement to SANA reporter said that the daily quantity of potable water to be transported is 300,00 liters, as for domestic water use, it is secured through shallow wells dug by the locals in the streets after the Turkish occupation had seized Alouk water station endangering a million civilians to thirsty.

The civil activities contributed to providing water tankers to supply drinking water to Hasaka ‘s locals with the increasing urgent need for it in light of corona pandemic.

A number of citizens in Hasaka affirmed that the Turkish occupation and its mercenaries of terrorists commit a humanitarian war against locals of Hasaka through depriving more than a million civilians in the area from water.