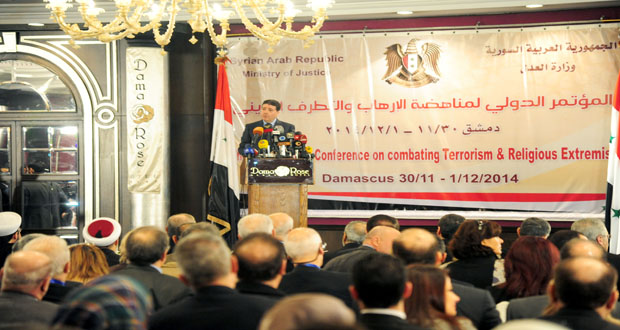 Damascus, SANA – Syria hosted on Sunday an international conference on combating terrorism and religious extremism, which has brought together political, religious, cultural and social delegations and figures from 25 Arab and foreign countries.

Chief among the issues which will figure high on the agenda of the two-day conference are international law and terrorism, terrorism and religious extremism, terrorism and national sovereignty and the illegality of the unilateral economic sanctions imposed on Syria.

Hosting the conference in Syria is “part of the efforts it has been exerting for almost four years in relation to countering the phenomena of terrorism and religious extremism,” said Prime Minister Wael al-Halqi in his speech at the conference.

The conference is being held while the war against Syria is grinding on into its fourth year “to prove to the world that President Bashar al-Assad’s view has been correct,” the Premier said, reiterating that the war targets the entire Syria, homeland and people, and not the “regime”. He affirmed that the Syrian government will proceed with its efforts in fighting terrorism wherever it is on the Syrian soil, as it will continue boosting the combat capabilities of the Army and the Armed Forces and the Internal Security forces.

Al-Halqi took the opportunity to reiterate Syria’s support for “any sincere international effort” against terrorism, including the mission of the UN Special Envoy for Syria Staffan de Mistura, providing that Syria’s national sovereignty and international conventions be respected.

In order for the terrorism-combating efforts to be a success, the Premier said, an international plan approved by the international community is needed.

To achieve that end, al-Halqi added, there should be a UN-brokered international conference and having an internationally accepted common legal definition of terrorism set.

Minister of Justice Najm al-Ahmad also addressed the attendees, criticizing the double standards of some countries towards what is taking place in Syria and their attempts to giver legitimacy to the acts of the terrorists who are fighting the Syrian people.

For his part, Minister of Awqaf (Religious Endowments) Mohammad Abdul-Sattar al-Sayyed highlighted the need that the conference come out with a stress that wahhabism is “a terrorist mentality” and call for a Security Council resolution banning wahhabism-promoting curricula and blocking websites used to spread takfiri and wahabbi thinking.

Discussions during the first day’s activities focused on international law’s position on terrorism, and how to confront terrorism on the global, regional, and Arab levels and promote a counterculture to protect future generations from its influence. Participants in the conference said that the terrorism targeting Syria poses a threat to the entire region, and that terrorism is being backed by the west to destroy the region’s societies, asserting that the true principles of Islam have nothing to do with the terrorists’ heinous acts of murder and slaughter, as true Islam seeks to bring people closer.

The participants stressed the need for Arab countries to set up a counterterrorism mechanism, denouncing the U.S. which supports terrorism while claiming to combat it, and noting that the terrorist organizations ISIS is securing funding by selling stolen Iraqi and Syrian petroleum as well as trafficking in archeological artifacts and robbing banks and crops, not to mention the “donations” provided to the organization by Saudi Arabia, Qatar, Kuwait, and the UAE, among others.

They also called for combating terrorism by removing its sources, promoting a comprehensive enlightenment, exposing the western policies and the role of U.S. intelligence agencies in supporting takfiri movements, and supporting the Palestinian cause, stressing the need to expose those who back terrorism.

The participants said that the conspiracy against Syria seeks to undermine the resistance, asserting the need for a unified Arab action to take out terrorist organizations and for focusing on ideals and concepts that are in opposition to terrorism and promoting them.

The participants stressed that the unilateral economic sanctions which were imposed on Syria are illegal.

They highlighted that the world’s silence over terrorism-supporting countries in the Gulf and the region violates the international laws and the countries’ national sovereignty.

They also underlined that the Zionist Entity is involved in all what is taking place in the region, as the current international terrorism is a duplicate of the colonial countries’ terrorism which aims at dominating the wealth of the region and dissuading its peoples from their national central issues.