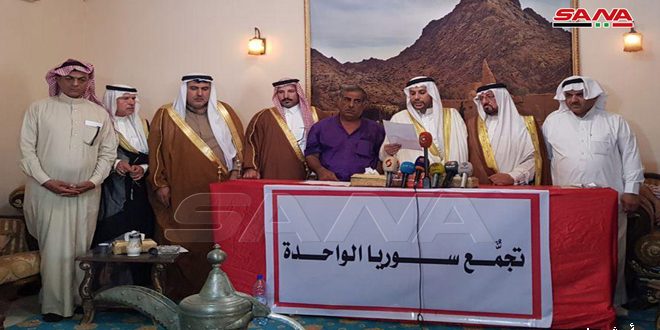 Hasaka, SANA- The gathering of One Syria in Hasaka province condemned the crimes perpetrated against the members of the Arab tribes and the tribes’ dignitaries by the US occupation-backed QSD militia, calling for expelling all the occupation forces.

In a statement on Thursday, the gathering said, on the background of the latest developments in al-Jazira and the Eastern areas, particularly in Deir Ezzor eastern countryside, that stability and security will not be restored to the region, unless eliminating the causes of chaos represented by the illegitimate presence of the foreign forces, like the Turkish occupation and the extremist organizations affiliated to it, as well as the US occupation forces which occupy the Syrian oil fields and loot their production in a flagrant violation of Syria’s sovereignty and the international law and the UN charter.

The statement called to overcome the differences and start a comprehensive national dialogue which preserves the rights and be the basis for resolving the crisis in Syria.

condemns crimes gathering of One Syria Hasaka QSD 2020-08-13
hala
Share
Previous 8 civilians injured in explosion of a landmine left behind by terrorist groups in al-Khuwin farms, Idleb southern countryside
Next 11 QSD militia gunmen killed or injured after being shot by unknown persons in al-Haul camp, east of Hasaka