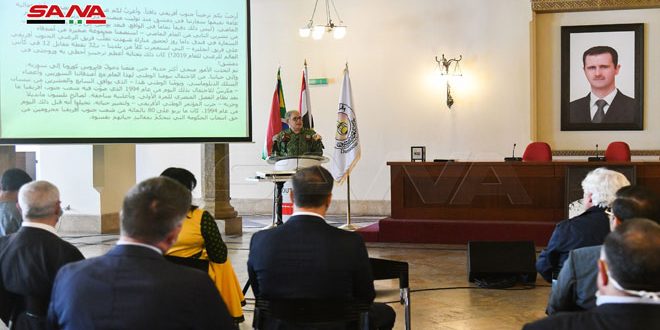 Damascus, SANA- On the occasion of Nelson Mandela Day, the Embassy of the Republic of South Africa in Damascus on Tuesday held a celebration that included a lecture on the resistant values of the late leader Mandela at the hall of Reda Saeed for conferences in Damascus University. South African Ambassador, Barry Gulder, stressed the importance of international solidarity, which is very important today like what it was during the days of Nelson Mandela, pointing to Syria’s pioneering role in mobilizing the international community against the apartheid regime.

Meanwhile, Deputy Foreign Affairs and Expatriates, Dr. Fayssal Mikdad, confirmed that President Mandela’s International Day is a day when the peoples of the world remember the struggle against the apartheid regime, indicating that Syria was part and parcel of that struggle. He described bilateral relations as deep and strong , represented by coordinating the political stances and solidarity at international forums, hoping scientific, economic and cultural cooperation would continue in various fields and on all levels after the elimination of terrorism from Syria.