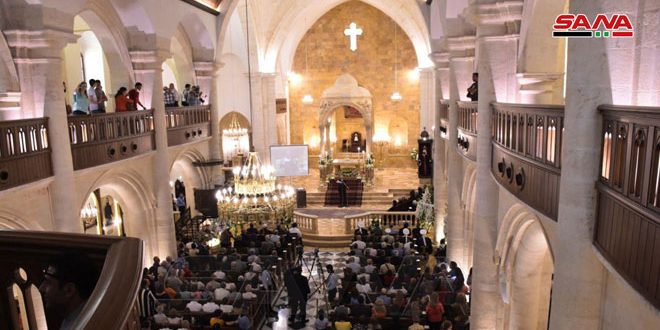 Aleppo, SANA-Aleppo celebrated on Monday the reopening of Saint Mar Elias Cathedral, which was affected by acts of terrorism, after it has been rehabilitated within the project of renovating Old Aleppo, as the monument of the Bishop Jermanios was unveiled in al-Jadidah neighborhood in the city.

The celebration included a short film about damages that affected the cathedral due to the terrorist aggressions in addition to the efforts exerted to rehabilitate it which included building the damaged facades and walls, the stone dome in addition to installing the wooden ceiling.

In a statement, Head of Aleppo’s Archbishop for Maronite, Bishop Mar Yousef Tobaji considered that rehabilitating the cathedral, as it is considered a living testament on terrorism practices in Aleppo, is a letter to the world that the life is stronger than the death and the good defeats the evil and the peace always triumphs over the war.

Grand Mufti of the Republic, Dr. Ahmad Badreddin Hassoun, stressed that the rehabilitation of the cathedral is a letter of challenge to the terrorism which targeted the places of worship, mosques and churches, referring that Syria will remain the birthplace of the heavenly religions and a source of light to the whole world, adding that the years of war on Syria have destroyed the stone but they couldn’t hurt the faith inside anybody of the Syrians.

Bishop Yousef Matar, Head of Beirut’s Archbishop recited a letter sent by the Patriarch of Antioch and All the East for the Maronites, Mar Bechara Boutros al-Rahi, in which he asserted the fraternity among human beings ,saying “this great scene in the cathedral today sends a letter that the Christians and Muslims , are brothers in Syria, Lebanon, Palestine and Jordan and our destiny is one”.
Apostolic Nuncio in Damascus Mario Zenari conveyed the letter of Pope of the Vatican, in which he congratulated the reopening of the cathedral ,stressing that reopening the church which has risen from under the rubble, addresses a letter to the world that the war is not inevitable, rather peace is a source of life.