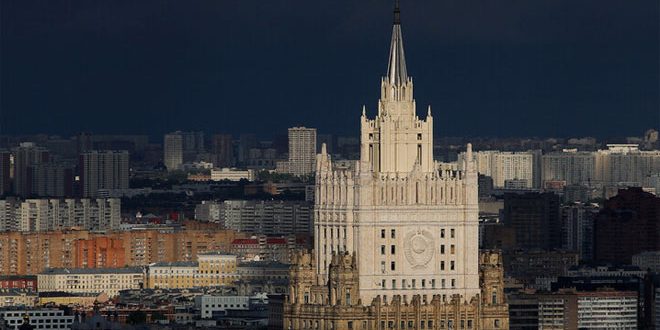 Moscow, SANA – Russia stressed on Friday that the US is attempting to distort facts to serve its own interests by criticizing the Chinese-Russian veto against a draft resolution regarding Syria.

On July 9th, Russia and China vetoed a draft resolution at the Security Council for extending the mechanism for transferring humanitarian aid across borders without the approval of the Syrian government for one year, as this resolution seeks to exploit the humanitarian situation in Syria and violates its sovereignty.

In response to US State Secretary Mike Pompeo’s statements about the Chinese -Russian veto, the Russian Foreign Ministry said in a statement that Moscow is disappointed by the way which Pompeo has permitted himself to comment on the discussions at the Security Council regarding the aforementioned draft resolution, pointing that such a stance represents another attempt to distort facts and reality for the sake of achieving narrow political interest.

The Ministry stated that Russia does not object to the extension of the mechanism for transferring  humanitarian aid across borders; rather it believes it is necessary to have this mechanism be in accordance with the real situation on the ground, particularly in Idleb, affirming that Russia calls for increasing humanitarian aid to Syria in coordination with its government.

The Ministry expressed regretted that the US and those who think the same way manage to manipulate humanitarian institutions to achieve their own agendas.

Pompeo has incited imposing sanctions against Russia and China after their veto, and the US also obstructed a Russian resolution on delivering humanitarian aid into Syria using one border crossing.